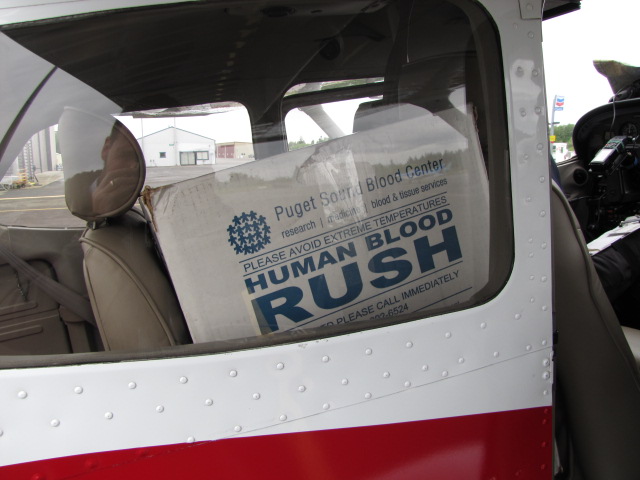 Most blood donors know that a pint of blood can save three lives because it can be separated into three components: red cells, plasma, and platelets. What you may not know is that this processing needs to done within five hours of drawing it from your arm. Otherwise, only the red cells are viable (up to 24 hours).

Between ferries, distance, and our region’s notoriously bad traffic, this critical time frame presents a challenge. BloodworksNW’s service area spans from Bellingham to Eugene and remote areas in between, but all blood is processed in our Renton laboratories.

We wouldn’t be able to save nearly as many lives without the special volunteers at Angel Flight West.

However, in May 2005, their all-volunteer crew of pilots began helping BloodworksNW transport thousands of units of blood each year from drives to our testing facilities, allowing us to process more units of platelets and plasma from whole blood and save more lives.

“The pilots are blood donors, in a way, because they create exponential value to the patients in the Northwest,” says Kyle McDaniel, Regional Operations Supervisor on our Transportation team, who has worked closely with Angel Flight West pilots for the past five years.

Angel Flight West typically only flies people, so it came as a surprise when they approached us about delivering blood.

This was perfect timing; the flights we previously relied on from private companies and commercial airlines for far-away pick-ups for all donated blood were costing our organization tens of thousands of dollars a year.

Angel Flight West now does 80-90% percent of our air transport. Pilots use own their own planes and fuel, volunteering their time. The pilots go to great lengths to make sure blood is delivered — “at the last minute a need will come up or blood drive will pop up, and I’ve even had requests filled the next day,” Kyle says.

In return, the pilots get hours on their flight record, but Angel Flight West’s 15 trips each week are invaluable to BloodworksNW. The average flight from Bellingham charters for more than $500, so, “their contribution can’t even be quantified.”

Of course, it’s all part of a delivery chain. Volunteer couriers use their own vehicles to take the blood from a drive to the airport. The planes land at Clay Lacy Airport in Seattle, which has been a gracious host for this entire decade. Clay Lacy has a designated transfer area for pilots to leave the shipment so they don’t have to wait for a BloodworksNW courier, who will pick up that blood for the final journey to Renton.

Several of these “airport runs” are staggered throughout a large blood drive to ensure timely processing and that our lab is not overwhelmed by an influx of donations.

In a long-term emergency situation (say, a bridge is down), Angel Flight West could reverse this route to get blood to hospitals.