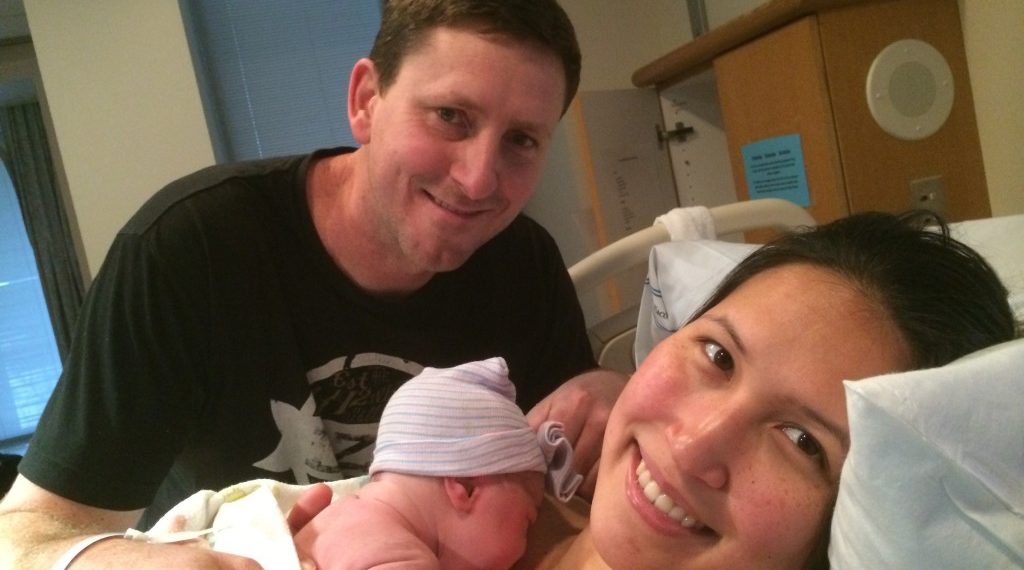 Like many expectant parents, Iris and Joel McFadden were anxious to learn everything they could before the birth of their first child, including the decision to donate umbilical cord blood.

“When we first got pregnant we looked at all the websites and there’s a lot of advertising for private cord banking. It seemed like a good idea, but we don’t have the money to bank, plus the yearly fees. I thought, ‘I wonder if they do donations!”

The Gig Harbor couple learned that BloodworksNW’s cord blood program was free for donor families to participate in and they could make all the arrangements in advance with their hospital. They liked that cord blood donation benefited research and kids with leukemia — “it could help anyone: family, neighbors, friends or someone we don’t know,” adds Joel.

The McFaddens wondered what might happen if their daughter ever need her own cord blood for a transplant, but read that a child’s own cord blood is often not even suitable for their own use because the genetic mutations that cause many disorders are present in it. They agreed that donating cord blood was the right decision for their family and would help others who are looking for a match.

Cord blood collection started at Multicare Tacoma General Hospital not long before the McFadden’s daughter, Marina, was born in February 2015, making donation available for the first time in the South Puget Sound; Marina was among the first donors at the hospital.

Iris was impressed by how the actual donation didn’t interfere with her family’s bonding following delivery.

“We held our baby, and I guess they were just doing it on the side. If we didn’t know we were donating, we wouldn’t have noticed it — we were so happy she was healthy and safe.”

Iris, a flight attendant, and Joel, a firefighter in Pierce County, have been enjoying their time with Marina, now 4 1/2 months.

“She’s really mellow. We’ve been really blessed to have a healthy baby girl. She’s such a ham – if we go anywhere, she’s looking at everyone and smiles at them.”

Iris and Joel would encourage everyone to consider cord blood donation. Says Iris,

“If it can save someone’s life — something we weren’t going to use anyways — I’m glad it would go to someone who could use it.

Families interested in donating cord blood should contact BloodworksNW Cord Blood Program staff about how to make arrangements. General information about the Cord Blood Program and enrollment can be found at: http://www.bloodworksnw.org/cordblood