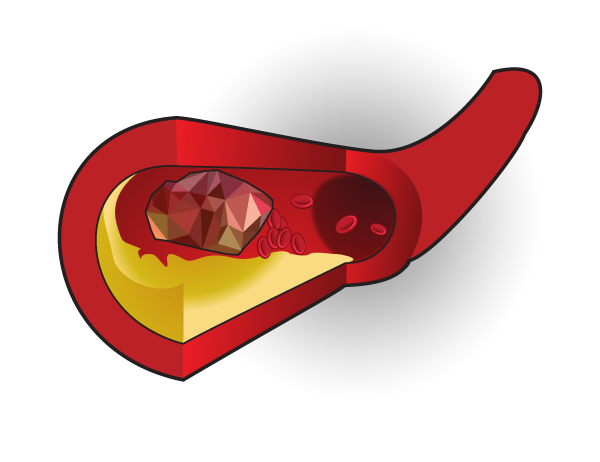 March is Blood Clot Awareness Month, so we sat down with Dr. José A. López, Bloodworks Northwest’s Chief Scientific Officer, to discuss the work his lab is doing in thrombosis (blood clot) research.

What is thrombosis and why is it such a concern?

“Thrombosis” refers to the formation of a clot within a blood vessel in the absence of an injury that causes bleeding. The thrombi [clots] are composed of platelets, red blood cells, and a protein mesh called fibrin. When a clot blocks a blood vessel, it prevents the tissues served by that vessel from being perfused by blood – the tissue doesn’t get any oxygen or nutrients and if this goes on long enough, the tissue dies.

If you add up all the different types of thrombosis, they kill more people than any other type of disease – AIDS, malaria, or cancer. Almost 100% of heart attacks are caused by thrombosis in the coronary arteries. Similarly, stroke is caused by a thrombus that can start in the heart and be thrown off to the brain or is formed within the artery in the brain. There are also thrombi in the legs – that’s called deep vein thrombosis, and they can get thrown off into the lungs to produce a condition called pulmonary embolism.

It’s estimated that 20% of cancer patients experience thrombosis. In addition to the diseases we normally think of as caused by thrombosis, there are syndromes where small blood vessels are occluded, like thrombotic thrombocytopenic purpura (TTP). TTP is a disease where thrombi form in small vessels throughout the body—in brain, kidney, heart, liver, pancreas. It’s a catastrophic disease, and if you don’t treat it, people die within a few days. 100%.

Why did you choose thrombosis as an area of research?

It started with a patient actually. Back in the previous millennium, when I was a medical resident, I saw a patient with TTP; I diagnosed her and helped save her life. It was such a rare disease, so I was asked to talk about it and because I had to talk about it, I had to learn about it. That actually interested me in platelets, and how they were involved in producing this dreadful disease.

What specifically are you examining? Any particular types of clots?

We’re really looking at all types of clots. In arteries, the blood is going fast and it’s under pressure. In thrombosis that involves the arteries, it’s generally believed that platelets are more important. They clump and form what are called “aggregates.” We’ve done a lot of work figuring out the mechanisms by which platelets are able to stick to the vessel wall. We have a collaboration with a group in Turkey, where they do this procedure in patients that have had a heart attack — they actually put a wire into the coronary arteries and suck out the clot, and we examine what’s in the clot.

We’re looking for platelet proteins, other blood proteins and other cells, but we’re also looking to see how the proteins get modified. Many of these processes happen because of oxidative stress. We are able to detect the oxidation of proteins; we have research that shows that some blood proteins become more pro-thrombotic when they become oxidized. The von Willebrand factor [a blood protein that sticks platelets to the vessel wall] changes when it becomes oxidized – it gets stickier. One possible implication of this work is that we now have a way to determine if anti-oxidant medications actually have an effect on important oxidant targets. At present, they are used for a number of disorders but there are few ways to determine if they are having an effect.

We also look at how clots form in the veins of the legs. This is not fast flowing blood. In addition, going back to clots in small vessels, we’re studying how these thrombotic mechanisms are involved in several diseases, including sepsis and malaria. We’re attempting to translate our findings to the care of patients.

Can you tell me about any notable breakthroughs?

NAC has been used in patients with cystic fibrosis because they accumulate a lot of dense mucous in their lungs and they can’t cough it out. I thought, “well, maybe we can use this stuff to break down von Willebrand factor.”

So, we did a bunch of work based on that idea, and it turns out NAC can break von Willebrand factor down! We did studies on human blood and mice, but not on patients. We published it, and it got a lot of press, and I’ve now heard of patients that had TTP and were refractory to other drugs, and doctors used this to save them. Every patient I’ve heard about woke up and got better. This could be a reporting bias – they only report the ones that are successful, but it is still if it has helped a few people.

I have also worked with engineers at UW to develop and study in vitro systems for making blood vessels. We’ve been able to do that. It’s really exciting. That paper also got a lot of press. We can use human cells to test their functions in small blood vessels. We’ve tested how Von Willebrand factor clogs up the vessels – why it happens at certain sites and not others. We also found using this system that platelets are really potent at helping existing vessels make new vessels. This has implications for new blood vessel formation in cancer and wound healing. When you heal a wound you need to make new blood vessels to serve the new tissue you’re creating. Small blood vessels are affected in many diseases but it isn’t necessarily apparent because the problem is so widespread and systemic.

What sort of equipment, subjects, etc. do you use?

We study living things. We study humans — we don’t generally do experiments on them, though we did one where we gave volunteers fish oil and studied them before and after they took the fish oil to see how well their platelets stick. We found that the ingestion of fish oils makes the platelets less sticky, so that could explain one of the benefits of taking fish oil.

We also study mice that have genetic lesions to test some of our ideas on. With the NAC, for example we demonstrated that we could bust up small vessel thrombi, giving us confidence that the drug probably would work in people. That said, you still have to test it in people to know.

We do a lot of laboratory work – we use a lot of systems where we study the interaction of blood cells with proteins or other components of the vessel wall and we do it under flow. The blood is always moving, so there’s a whole bunch of physics that goes into understanding what’s involved when a blood cell attaches to the vessel. A platelet needs to attach to a vessel wall as it’s going by traveling very fast, and we’ve done a lot of work on this problem and have defined some diseases where this mechanism doesn’t work.

What can you tell me about your team?

The two most senior people are Junmei Chen and Adam Munday — they pretty much run the experiments day to day. We have several technicians, people who really do all the laboratory work, and we also have trainees, post-doc fellows. I work with a couple of students from the University of Washington. There is a lot of training going on – we really consider ourselves to be parts of the UW in terms of training the students, teaching them how to do research, education, etc.

I’m a real believer that, if what you are trying to do is learn how things work, you will discover important things that will help you to manipulate the system, which helps to translate the solution to patient care. Sometimes the inspiration is from a clinical problem, say TTP, but for me that inspiration does not lead to “I’m going to find a cure for it right away.” Instead, I try to learn how the disease works. If you just try to cure something by attempting different things empirically, if you cure it by accident, you won’t know why you did it, and it may not work on someone else.

What we do is try to understand the problem. In the process of understanding it, you find things that you couldn’t have predicted. And when you don’t have a defined solution, you have the knowledge to make good educated guesses.