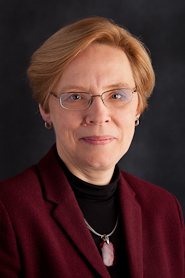 March is Hemophilia Awareness Month, as designated by President Reagan in 1986. Dr. Barbara Konkle is interim director of our Hemophilia Care Program and describes Puget Sound Blood Center’s work in treating hemophilia and other bleeding disorders.

Hemophilia is a bleeding disorder that results from either not having a protein that’s needed for clotting or having an abnormal clotting protein.

What misconceptions do many people have about hemophilia?

The other misconception is the is expectation that someone with hemophilia will look abnormal and they don’t. With current therapy, persons with hemophilia can lead normal lives – they can do basically what anyone else can do.

Can you tell me more about PSBC’s clinical program and research?

The clinical program provides comprehensive care to patients with bleeding disorders, including hemophilia; we have physicians and nurses, a social worker, physical therapy, and support staff that allows us to assess the needs of the patients and support them in their treatment. Many patients treat themselves at home with factor replacement medicine that they have to put in their vein, so the patients and families have to learn how to do this. The comprehensive care model allows us to support them in this treatment and other needs.

It was shown some time ago that this model of comprehensive care allowed patients to be more independent and also allowed them to live longer. Research at PSBC is linked very closely to the clinical program. We are testing better ways to diagnose and monitor hemophilia, von Willebrand disease and other bleeding disorders, and, in collaboration with industry, are assessing new products to treat bleeding disorders, including gene therapy for hemophilia B. We are leading a national study to assess heart disease and blood clotting problems in older men with hemophilia. We are collaborating with researchers at the University of Southern California and other institutions to help understand the challenges and expenses patients with hemophilia face. Our physical therapist, Lorraine Flaherty, is studying how to decrease falls in persons with hemophilia and ways to improve physical therapy for elbow issues.

We are the central laboratory and a Steering Committee partner for a national project, called the MyLifeOurFuture program. This project aims to determine the genetic cause of the hemophilia in all patients in the U.S., and eventually provide testing for females who may be carrier s of hemophilia. With informed consent, we are collecting and storing blood samples and data in a repository which will be used nationwide for research in hemophilia in the future.

I got interested in bleeding disorders when I was a resident in internal medicine. I found the medical problems the patients face and the close link to findings in laboratory testing fascinating. Hemophilia is a chronic disease where our goal is to work with the patient and family to minimize symptoms, so they can lead a normal life. This is very rewarding. I started in a hemophilia clinic as a fellow 30 years so, so this is my 30th year in hemophilia.

What are the most significant changes you’ve seen in the past 30 years?

The most significant changes – because I treat adults with hemophilia – we now have young men who are coming to our clinic and they have normal joints and no other signs of past bleeding. They’re just doing phenomenally well. In our young adult patients we are now seeing the benefits of the widespread use of prophylaxis therapy from a young age.

I entered hemophilia the year before the HIV virus was defined, and that was a terrible, terrible time in hemophilia with many patients dying of AIDS. It was before we had effective treatment for HIV infection, and we lost a lot of patients. No clotting factor products have transmitted the HIV virus since 1985 and none have transmitted hepatitis since around 1990. Many older patients are still struggling with these infections, although treatment is much improved. Fortunately our younger patients don’t have to deal with these infections.

What should parents of babies newly diagnosed with hemophilia know?

You child should have a normal life expectancy and should be able to do what other children are doing.

When I see an 18, 19-year-old, we have to expect that he will live to 80 or longer, so I have to be sure that we do all the right things so that he can get down on the floor and play with his great-grandchildren. That’s our goal.

What should blood donors know?

Most of our treatment for hemophilia no longer comes from blood products. That was critical in the past, and that’s why hemophilia programs are often linked with blood centers. While many treatment products are now produced by recombinant DNA technology, children and adults with bleeding disorders are still at risk of bleeding and needing blood, and so donations are still really important for the hemophilia population even though we use them less. Also, some of our patients with rare bleeding disorders still rely on donated blood products for treatment.