A Super Volunteer With a Simple Reason Why 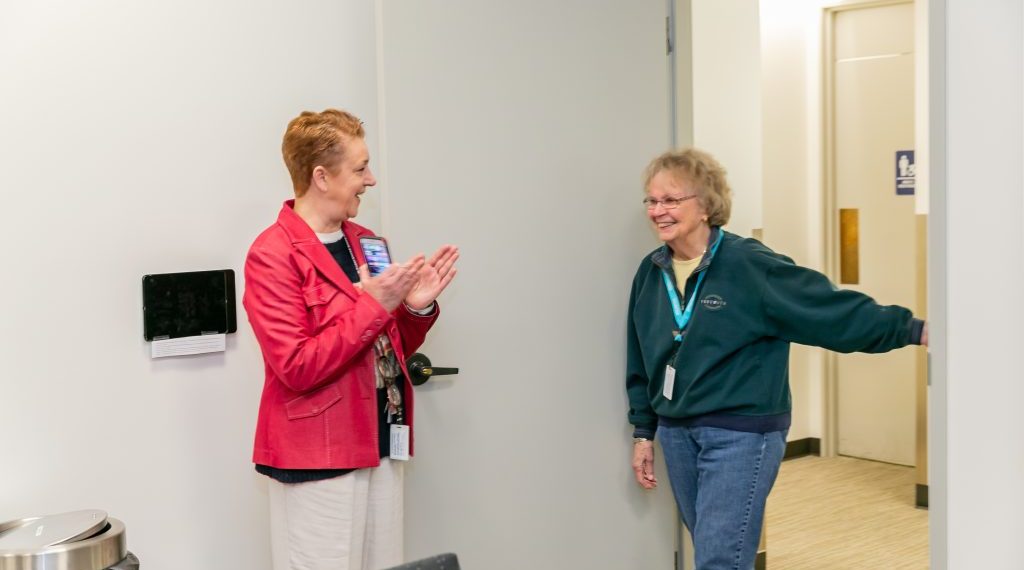 The room is filled with giddy anticipation. It’s a gathering of Bloodworks Northwest volunteers and employees eagerly awaiting the guest of honor (and, as it happens, birthday lady): Shirley Stubben, a dedicated Bloodworks volunteer for over 25 years.

Eyes whip toward the door each time someone slips in. Finally, it’s the entrance everyone’s been waiting for.

As she crosses the threshold, Shirley grins at familiar faces but then freezes, momentarily flabbergasted by the full scene: flashing cameras, balloons, banners and a buffet spread. “I wasn’t looking for any of this,” she later said with tears in her eyes.

Super woman! Shirley has been a regular volunteer at six local organizations for over 20 years.

Not one to call attention to herself, Shirley’s motivation for volunteering is simple: “It just gives me a good feeling.” Incredibly, Bloodworks is just one of many local organizations to which she has regularly given time for over two decades, including the Arthritis Foundation, West Seattle Food Bank, Washington Talking Book & Braille Library, and Seattle Goodwill. At age 80, she volunteers between 120 and 150 hours each month.

“I’ve been a volunteer for the biggest part of my life,” she said. “It’s so easy to give money, but to donate time and skills to help a nonprofit I think is just the ultimate.”

Bloodworks CEO and President Dr. AuBuchon thanks Shirley for her dedicated service.

A former data security analyst for Washington Mutual Bank, Shirley first heard about Bloodworks through her company’s monthly blood drives. “They needed volunteers to help monitor the donors, so I started volunteering every month,” she said. Soon, she was recruiting co-workers to pitch in and contributing extra hours at Bloodworks’ Seattle Central Donor Center every Wednesday night.

After almost 20 years as a donor monitor and registrar, Shirley was itching to put some of her other skills to use. “Someone said, ‘Well, the Bloodworks Cord Blood Program needs help,'” she recalled. She started out helping the Cord Blood Program send thank you letters, file, and complete other small projects. Now, she’s back to her data roots, entering cord blood donor information and running reports on the new mothers’ lifesaving gifts.

According to Shirley, the payoff doesn’t only come in the form of balloons and bouquets. “I get gratification when I know that what I do is important to the group that I’m doing it for,” she said. “I like to know what I’m doing is benefiting the department and in turn the organization and in turn the people who benefit from Bloodworks.”

Shirley’s reason for giving is simple: “It gives me a good feeling.”

Speaking of Bloodworks beneficiaries, if there’s one thing Shirley’s as passionate about as volunteering, it might be blood donation. A blood donor herself, her face lights up when she talks about giving blood. “It’s like, why not,” she said, pounding her fist on the table in front of her. “People say ‘I don’t know, I don’t like needles.’ You know what! It only takes less than 60 minutes.”

Shirley makes it a point to share her passion for volunteering with her son, daughter-in-law, three grandchildren and three (soon to be four) great-grandchildren. And after a quarter of a century with Bloodworks, she’s inspired many others to be a little more giving as well. After all, why not?

You can make a lasting impact in the community with the gift of time. To learn more and apply to be a Bloodworks volunteer, visit our website.