Kevin Jones’ annual barbecue benefit for Bloodworks Northwest began nine years ago with 17 of his friends in his front yard. But as he tells it, “a few people got upset because they weren’t invited, and it just kind of blew up from there.”

The Greasy Biker and Neighbor Barbecue has blown up so much since then that this year’s shindig – coming up on August 18 – will be held at the Oakville Regional Event Center southwest of Olympia. Kevin and his motorcycle-loving friends are planning on 500 attendees, and their goal to raise $5,000 for Bloodworks is double what they brought in last year.

This time around, Kevin’s going all out with BBQ pork, chicken and oysters on the grill, live music from Muckleshoot Casino Battle of the Bands finalist Sin Circus, camping facilities, mini bike jousting and barrel racing, a keg race and a “monster” four-way burnout pit. The highlight will be an auction for two barbecue tickets signed by NASCAR legend Richard Petty, who happens to be Kevin’s cousin. 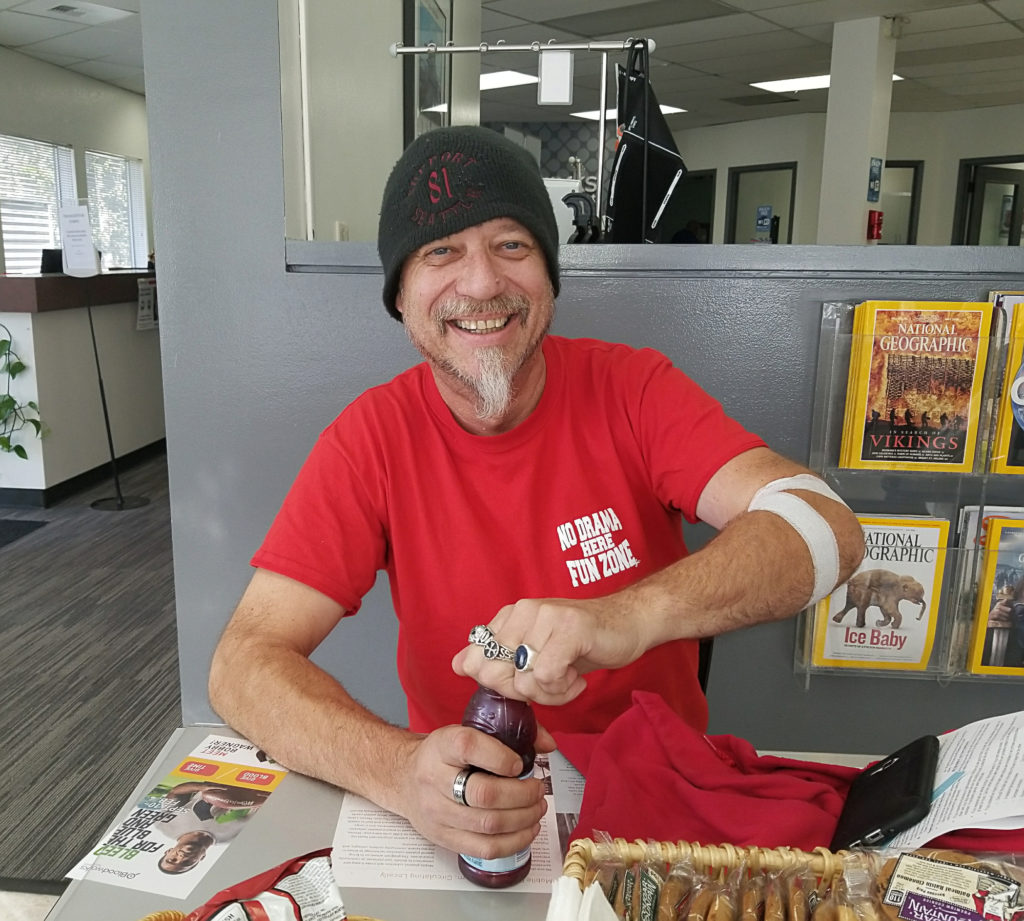 For Kevin, the event is about a lot more than a fun summer gathering with his friends and neighbors (and his love for Harleys). His drive to support Bloodworks is personal, stemming back to two blood transfusions he received after a hereditary colon cancer scare at 17. “That surgery got me thinking that one of these days I’ll go in and donate,” Kevin said. “I was adamant about coming back and repaying them.”

Kevin is also inspired by his sister’s fight with leukemia over 20 years ago, which convinced him to become a platelet donor. “I just remember how much platelets gave her that vitality and that energy to carry on her battle,” he said. “Eventually she lost it, but when I found out I could donate platelets and it was that easy, I was super stoked.”

Just like the blue custom Harley he rides – with Richard Petty’s signature on the gas tank, of course – Kevin’s passion for Bloodworks and supporting his community is, on purpose, not subtle. This Saturday, in the massive plumes of tire smoke rising from the burnout pit after four bikes light up their tires all at once, engines bouncing thunderously off their rev limiters, Kevin Jones and his buddies will give a whole new meaning to #BoldforBlood.

“I donate to Bloodworks because everybody needs blood,” he said. “I don’t care what race, color, creed, religion you are or what you believe. It doesn’t matter; we all bleed the same and we all need blood. That’s why I’m siding with Bloodworks Northwest.”