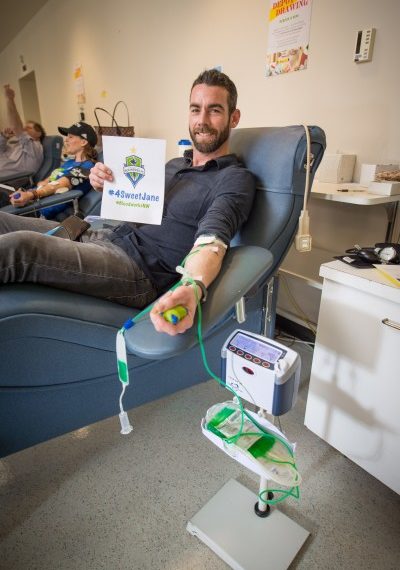 On a sunny, mid-April Thursday, Bloodworks Northwest confirmed what has been rumored for years: 15-year Sounders veteran, Zach Scott does, indeed, bleed rave green. While startling for some on hand at the downtown Seattle donation center, it will come as no surprise to fans of the MLS Champion.

When 3-year-old Jane was diagnosed with stage IV kidney cancer on St. Patrick’s Day, friends like Zach and Alana Scott asked her family how they could help. The family had a simple answer: donate blood and platelets. The Scotts already understood the vital role donors play in the fight against cancer as they have another family friend with a daughter fighting the disease. Eleven-year-old Avery Berg has been kicking brain cancer since last August. Her mother Kristie recently explained, “Avery has received three platelet transfusions just this week and countless platelet and blood transfusions since August. We literally couldn’t do this without donors.”

Zach and Alana scheduled their visit, rolled up their sleeves, and made their donation in honor of Avery and Jane. They encourage everyone to donate the gift of life, “Sounders fans have the biggest hearts and I know they will answer the call to support these young warriors in the fight of their lives.”

Each pint of blood donated will go towards helping patients like Avery, Jane, and other tiny warriors. And as Mr. Sounder himself exemplifies, anyone can make a difference.