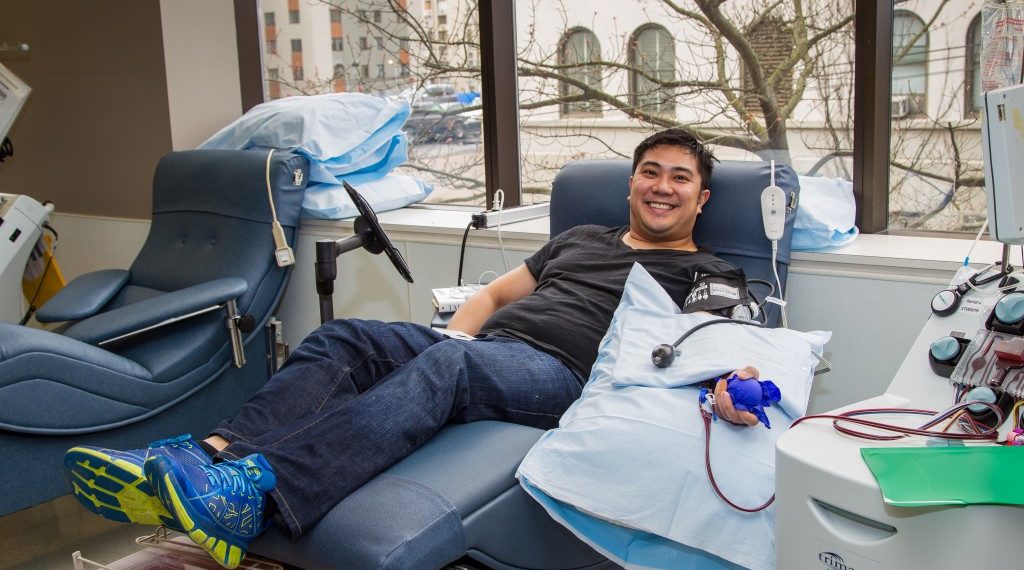 John-Paul Europa likes to joke about his sports aptitude as a kid.

“I won the ‘Most Inspirational’ award many times as a youth, which is code for ‘Hey, you’re not that good…but you try as hard or harder than anyone else,'” he said with a laugh.

Despite often landing on the bench, he loved being on a team. And though he didn’t know it then, his enthusiasm for sports prepared him to save countless lives as a blood donor, collector and administrator.

Donor
It started with a high school sports medicine class. “It was a great opportunity to start learning about the healthcare industry and get experience,” he said. “I found myself on the bench during sporting events, but I thought, ‘Hey, I have a purpose here.'”

The class also regularly organized blood drives which, John-Paul admitted, were a great way to get out of school. “It was easy for me to sign up and donate blood, and miss class and have a good reason to do it,” he said.

The blood donation habit stuck. As a student at the University of Washington, John-Paul donated regularly. To date, John-Paul has made 98 lifetime donations of whole blood and platelets.

Collector
At UW, John-Paul knew he was interested in a healthcare career, but didn’t know which path to take. Drawing on his sports medicine experience, physical therapy seemed like a natural fit. That is, until a new field caught John-Paul’s eye. “I interned as an athletic trainer for two years and was exposed to UW’s nursing school,” he said.

A seed was planted. John-Paul graduated with a degree in psychology and set his sight on becoming a nurse.

His first job out of college was a step in the right direction: he became a Bloodworks Northwest phlebotomist, and collected blood at mobile drives. John-Paul remembers particularly enjoying working with blood donors and volunteers. “We make the experience for the donor as simple as possible to alleviate the stress and first time nerves of donating blood,” he said.

Administrator
John-Paul went on to earn a formal nursing degree and landed a pediatric oncology nursing job at Seattle Children’s. “It was a difficult but very rewarding experience,” he recalled. “It was a daily reminder of the importance of blood donation, not only having experienced donating and collecting the blood, but seeing the process of how to administer the blood safely and the young patients being helped.”

Today, John-Paul works as a registered nurse for Northwest Kidney Centers where blood transfusions are vital for many dialysis patients. Looking back, he said his experiences have given him a greater appreciation for the blood collection process and our generous community of blood donors. “It’s an elaborate process to make sure that patients get blood safely,” he said. “We can’t do any of this without the donor.”

No matter which part of the blood donation process you support, take it from John-Paul: we’re all on the same lifesaving team.

Want to be a blood donation MVP? During the summer months, local patients need your blood more than ever. Register to give today.

Meet the Bloodworks Board