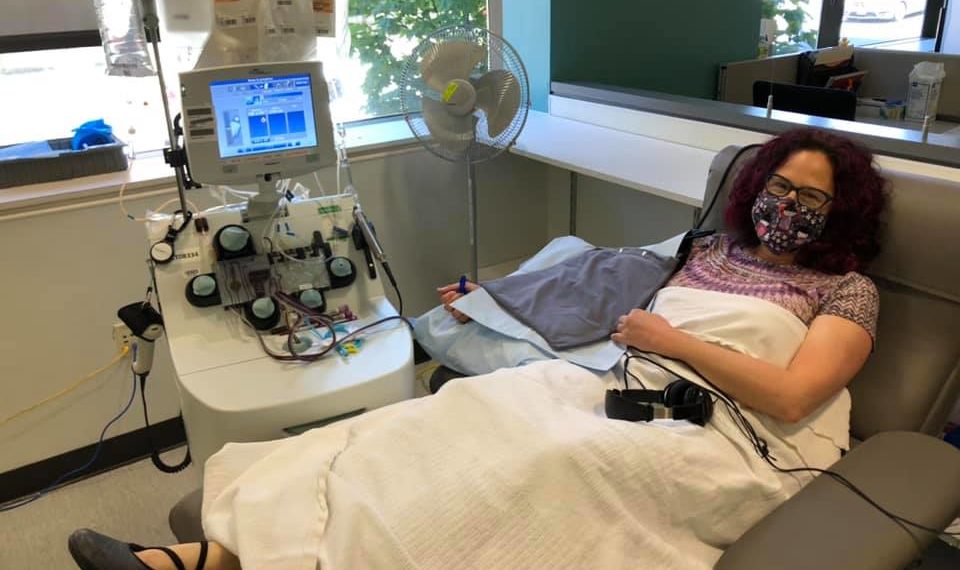 Music’s in our Blood! We’re joining with local artists and partners with a goal to recruit 10,000 new donors by the end of the year. Because: Together we give. Together we live.

“My mom was a warrior,” Elisa Barston says of her mother, Gilda Barston. “She was a super strong woman in every sense of the word.”

Gilda was cellist, educator, and trailblazer who championed the Suzuki method, a community-driven approach to teaching music established by Japanese violinist Shinichi Suzuki.

Suzuki theorized that a child could learn to play a musical instrument as easily as picking up their mother tongue by applying the principles of language development to musical training: listening, repetition, and encouragement.

“It was back in the late ‘60s,” Elisa explains, “and my mom took a course in Suzuki child education when she was a cello student at Julliard, and she was just fascinated and enamored with it. She was one of the pioneers in the Suzuki cello school – I guess it was just violin back then at the beginning – and it just became a huge part of her life.”

The cello is among the most soulful and versatile symphonic voices, capable of anchoring an ensemble or carrying a melody on its own, from the grounding monotony of the eight-note bass loop in Pachelbel’s Canon in D to the transcendent solo power of a Bach Suite.

Gilda embodied this duality in her own right as an influential force in her daughter’s musical upbringing while inspiring generations of young cellists.

“I’d come home from school, and she was just always teaching. It was her massive passion in life.”

Even when diagnosed with Stage 4 breast cancer in 2008, Gilda never wavered in her commitment to her cello students.

“She refused to let that slow her down for one second,” Elisa recalls. “I would forget all the time she was sick.”

Gilda’s medical team put her on a chemo medication that kept her breast cancer at bay and allowed her to continue her chosen path.

The drug took a toll on her blood, however, and in 2016 the treatment led to a fatal case of leukemia.

“She got eight years of full life. And even with the last six months with the leukemia – where she was sick, she was really slowing down – she did not stop.”

Gilda promised to graduate her last class of cello students.

“She’d come back from chemo or a blood or platelet transfusion and go right back to teaching – but would have to do some of it from her recliner, sometimes,” Elisa laughs. “But she graduated that class at the end of May, and a month later, she was gone.”

While the grief will never go away, there’s only joy and laughter when Elisa talks about her mom.

“She must have been exhausted, and probably didn’t feel too well, but she wasn’t going to just sit there and waste a minute of her precious life.”

Elisa remembers driving Gilda to the cancer care center and keeping her company as she received blood or platelets. She noticed how much better her mom looked and felt after each transfusion.

“She had more energy to go off and teach her beloved students.”

The sheer number of patients in the ward who all needed blood components made a deep impression. “I remember starting to think, ‘wow. Who gave this gift?’”

Something clicked: she began donating blood again (after being deferred for medication in her earlier years) and then switched to platelets.

Elisa scheduled her most recent donation on the five-year anniversary of her mother’s death.

Like her mom, she makes the most of each appointment by going out for an iron-rich meal with a loved one the evening before and treating herself to a favorite pastime after – a nap.

“I love to feel like I’m doing some good. I’m helping somebody. I don’t know who it is, but I’m giving a gift that’s going to make somebody feel better like I saw my mom feel better.”

Blood isn’t the only gift Elisa has given. In 2013, the 13-year-old son of a professional acquaintance needed a kidney transplant. Elisa was a match.

The boy is now all grown up and set to attend grad school at the Royal Conservatory of Music in London this fall, thanks to Elisa’s selfless donation, and the two families have become close.

“I’m so jealous – my former kidney is living a more exciting life than I am!” She jokes.

Gilda’s legacy lives on in more than just platelet and organ donation: Elisa is the principal second violinist with the Seattle Symphony.

Which is a pretty exciting life for her remaining kidney, if you ask us.

And did you know that Bloodworks is hard at work on research to extend the shelf-life of platelets, allowing your donations to go even further?