"A Mother Against the Odds:" Elaine Sonntag Johnson, 1,000+ Pint Recipient 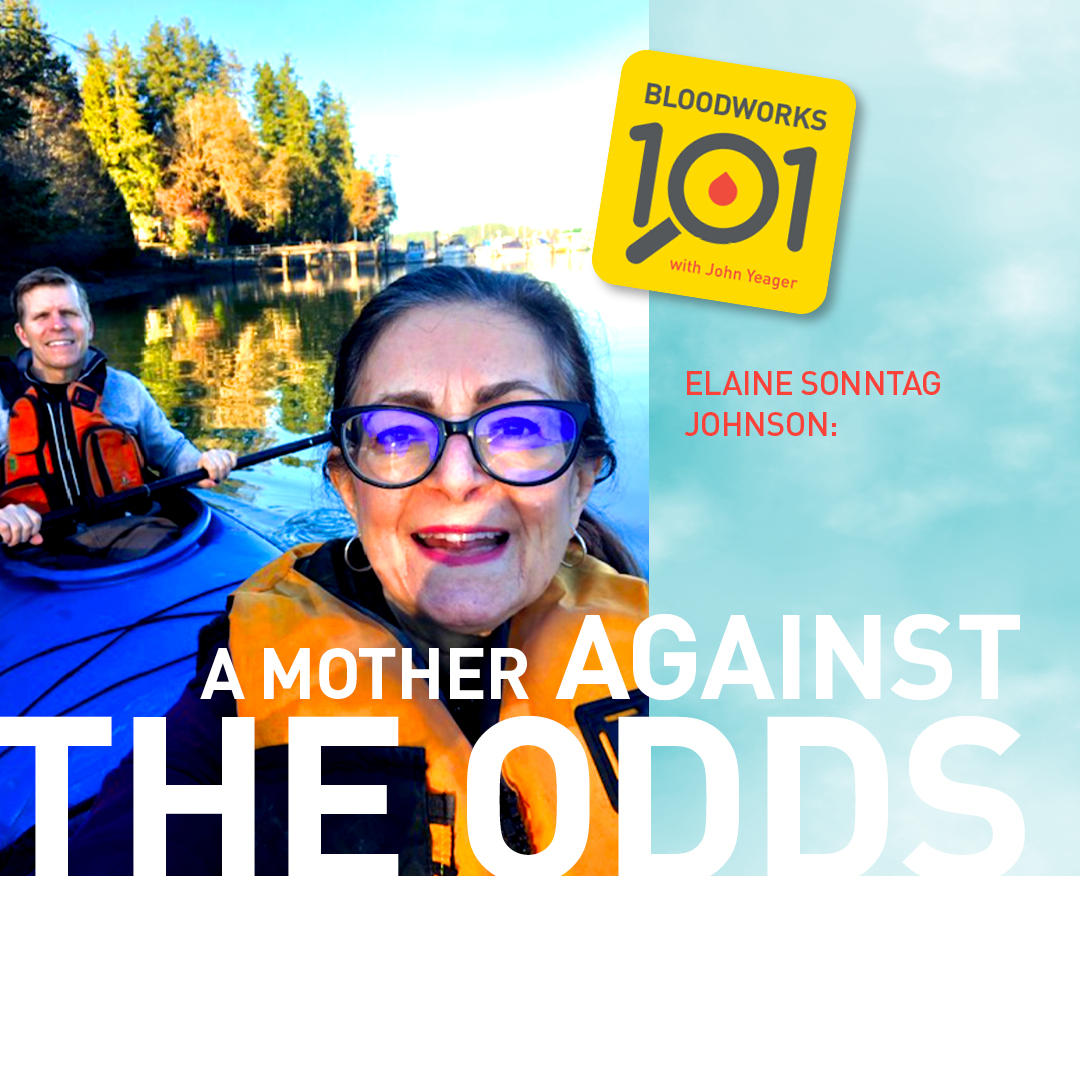 Elaine Sonntag Johnson was just 30 years old when she got her fatal diagnosis. “Your blood is weird,” her OB-GYN has said; she’d gone to see her when she’d been struggling to get pregnant with her husband Daniel and she’d run a panel of blood tests. She was blissfully married, eager to start a family, and loving her new career in social work as a family therapist. When she was referred to see specialist Dr. Douglas Lee, those blood tests in hand, Elaine got news that threatened everything.

“I think I know what you have,” Dr. Lee said, “but I’ve never met one.” What followed was a long jumble of consonants and vowels that would change her life forever, teach her about resilience and hope, and make her the single highest recipient of blood transfusions in all of King County, WA’s history – over 1,000.

The diagnosis was paroxysmal nocturnal hemoglobinuria (PNH), a non-hereditary blood disorder that affects two per every one million people. PNH is characterized by a destruction of red blood cells blood clots, and impaired bone marrow function which meant her body wasn’t able to make enough of the three critical blood components for her to survive. Elaine poured herself into research about the disease, but what she found was grim:

“Every single article was about horrific deaths, that people didn’t live very long,” she said. “It was a three to five-year life expectancy, and I was 30. So the news was, you’re not getting pregnant, and also you’re gonna be dead really soon. That was rough. The weirdest part was I was asymptomatic; I felt totally fine.”

“Asymptomatic” didn’t last long. Soon after her diagnosis, her Elaine’s white cell, red cell, and platelet counts “tanked” and she was routinely admitted to the hospital and endured many surgeries. That began an 18-year stretch when she received a red blood cell transfusion every month and platelets every five days until, somehow, her platelet function was restored.

Despite her poor health, Elaine remained determined to become a mother. But when she and Daniel approached various adoption agencies, they were declined due to her curtailed life expectancy. They were heartbroken, but Dr. Lee must have known he had a medical outlier on his hands. “So we talked to Dr. Lee and the three of us sat around and cried,” she said. “I told him, ‘I need a letter that says that I’m likely to survive for 18 years.’ And we all knew that wasn’t true. There was nothing in the literatures that said that, but he wrote that letter. And we got to watch our two adopted two kids be born, and now they’re 23 and 27.”

“I have been shockingly lucky in every way, except for getting sick,” Elaine said. “And my husband is an eternal optimist. He always thought a treatment would be found.” A few years ago, he was proved right, with the development of a monoclonal antibody treatment for PNH patients that restored her red and white blood cell production. Elaine was a participant in the second-generation study and now, with infusions of the new treatment every other month, “I hardly ever need blood; I really only need it if I get a fever or something.”

Having successfully obliterated that three- to five-year life expectancy she was given on the day of her diagnosis, Elaine has found a community of PNH patients online. “I’m kind of the ‘Grande Dame’ of this Facebook group because I’m one of the people who has lived the longest with this.”

“People will say in the group, ‘I don’t know how long I’ll live.’ And here I am, 30-some years after having been diagnosed a long time ago; I can give people hope.”

That hope, for Elaine, might be hereditary. “My dad escaped from Nazi Germany in 1936 to Brazil; there were a lot of Jewish people who got there because they couldn’t go anywhere else. And my mother’s a Russian Jew, they ended up in Brazil and that’s where I was born. My dad was full of joy; he loved music and he worked till he was 70. So I just have good models for, well, just go ahead and do everything you can.”

Today, Elaine lives a mostly normal life. She can’t work anymore due to residual pain from an intestinal clot, but she enjoys life with Daniel and two grown children, Tess and Greyson. “If I feel sorry for myself for a second,” she said, “I know that’s the worst place for me, so I have to go do something to help somebody because I know that’s a better place to be.”

And what does Elaine Sonntag Johnson, 31-year-and-counting conqueror of a disease unmatched by her courage have to say to the blood donors who gave her the life she treasures today? As it turns out, a lot:

“I think that blood donors are really the most heroic people because they don’t know to whom they’re giving blood. It’s just sort of a wonder to me. But they’re kind of quiet heroes. There’s no parade for them. It’s just, ‘I know it needs to be done.’ It’s really the best example of community support. Literally, I knew what I needed, but there’s no way to get it other than to know that there are little angels running around who will take time and give of themselves, part of their body, in the most profound way. That’s amazing.”

Like all patients, Elaine would not have a chance at long-term survival without blood donors’ support every step of the way. She is healthy today, but many more people just like her continue to need our help. Click here to listen to Elaine tell her story on our Bloodworks 101 podcast and when you’re done, be sure to schedule a blood donation appointment too; you never know who’s going to be counting on you next. 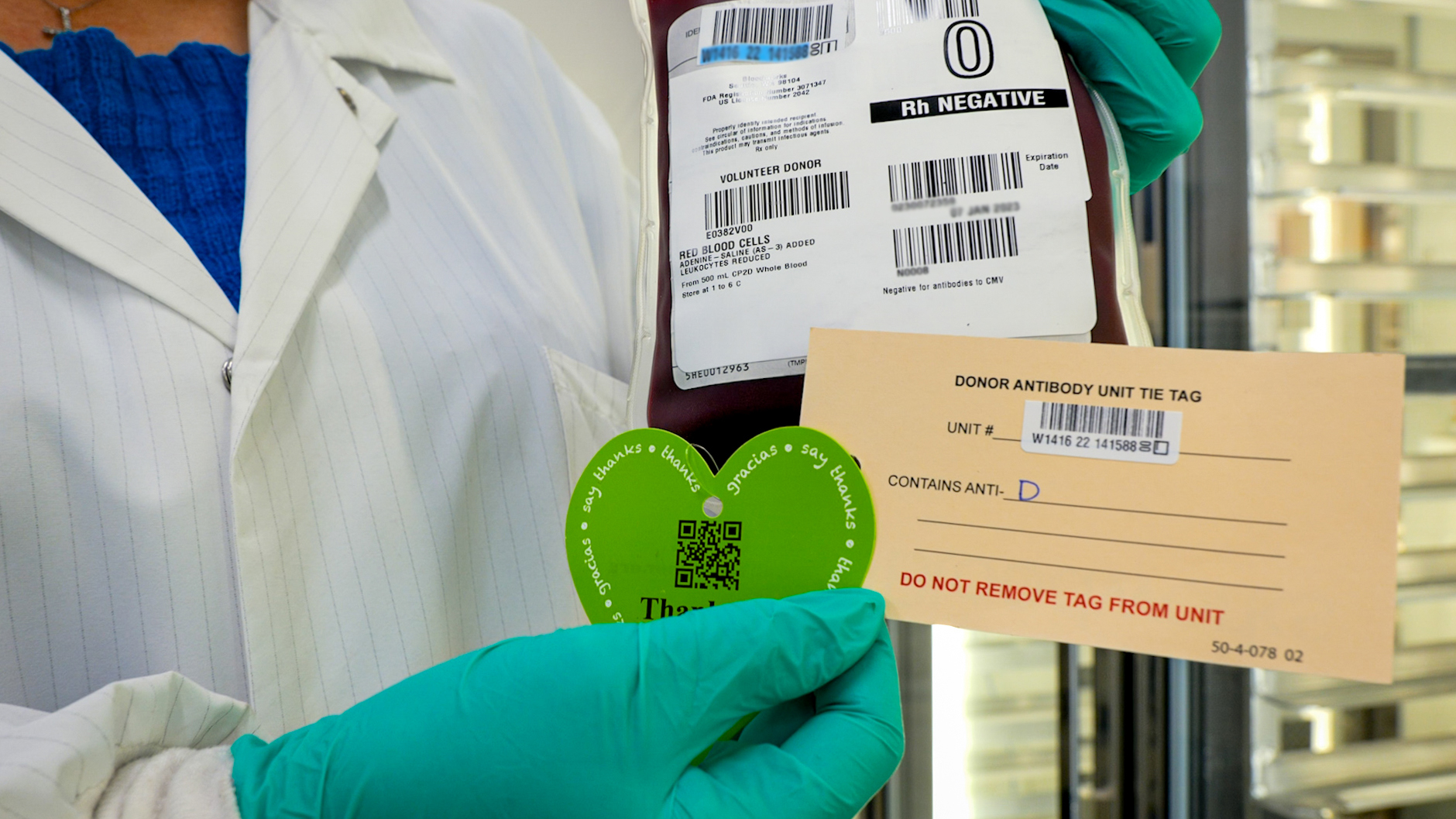