Cancer Never Kept Her from Smiling 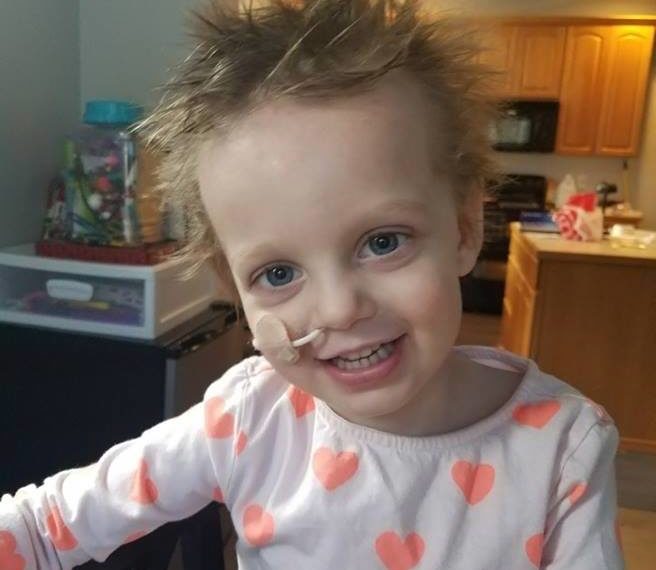 Five-year-old Layla Beckstrand’s motto is “I may be small, but I do big things!” Well, since October 2015 when she was 18 months old and diagnosed with Stage IV High Risk Neuroblastoma, she’s been facing – and overcoming – things much bigger than she or her parents Jessica and Mike could ever have imagined.

Layla’s cancer hit the Beckstrand family like a thunder – when she was diagnosed it had already spread to her bones, and the tumor in her abdomen was the size of a softball. “Doctors say your child has cancer and you literally just don’t hear anything after that point,” Jessica said in an interview on King 5 TV earlier this year. Layla had transformed from her vibrant, spunky self to gravely ill seemingly overnight. Big things indeed.

Before even her second birthday, “Little Lady Layla,” as her mom calls her, endured six rounds of chemotherapy, radiation, surgeries, immunotherapy and two stem cell transplants.

She received 36 blood transfusions, spent four months in the hospital and was poked and disturbed for endless readings of her vital signs. All that for a little blonde girl from Marysville barely pushing three feet in height, but with enough spunk, vigor, gratitude, and positivity to create joy out of thin air.

Layla achieved remission in April 2016, and finished her treatment in February 2017, a week before her 3rd birthday. And on Monday, September 9, 2019, she started kindergarten with King 5 there to capture her first day.

Layla is back, her cancer becoming a more distant memory with each passing day. She still goes to Seattle Children’s, but only occasionally and in the Survivorship Clinic. And, of course, to see the fish and resident hermit crab on the third floor.

Approximately 300,000 children are diagnosed with cancer every year, including about 16,000 in the United States alone.

Jessica Beckstrand has taken on an activist role as the dust of Layla’s illness has cleared, launching a Strong Cares Guild in honor of Layla and raising awareness of the need for blood and financial donors. In September, she hosted one of three “Out for Blood with Zach Scott” blood drives in partnership with Bloodworks and Seattle Sounders FC during Childhood Cancer Awareness Month in honor of the many children fighting cancer.

So Layla says today even though she’s small, she does big things. But after the big things she’s stared down in her short life, it’s a safe bet she’ll be doing big things when she isn’t small anymore too. She, anyone who knows her will tell you, is just getting started.

“We have two lives,” Jessica wrote recently on social media. “The second one begins when we realize we only have one.”

Together, we can help kids beat cancer. Give blood at a Bloodworks Donor Center near you, add your name to the National Marrow Registry, and let your friends, colleagues and family know about the need for more donors.