Brewing up something good 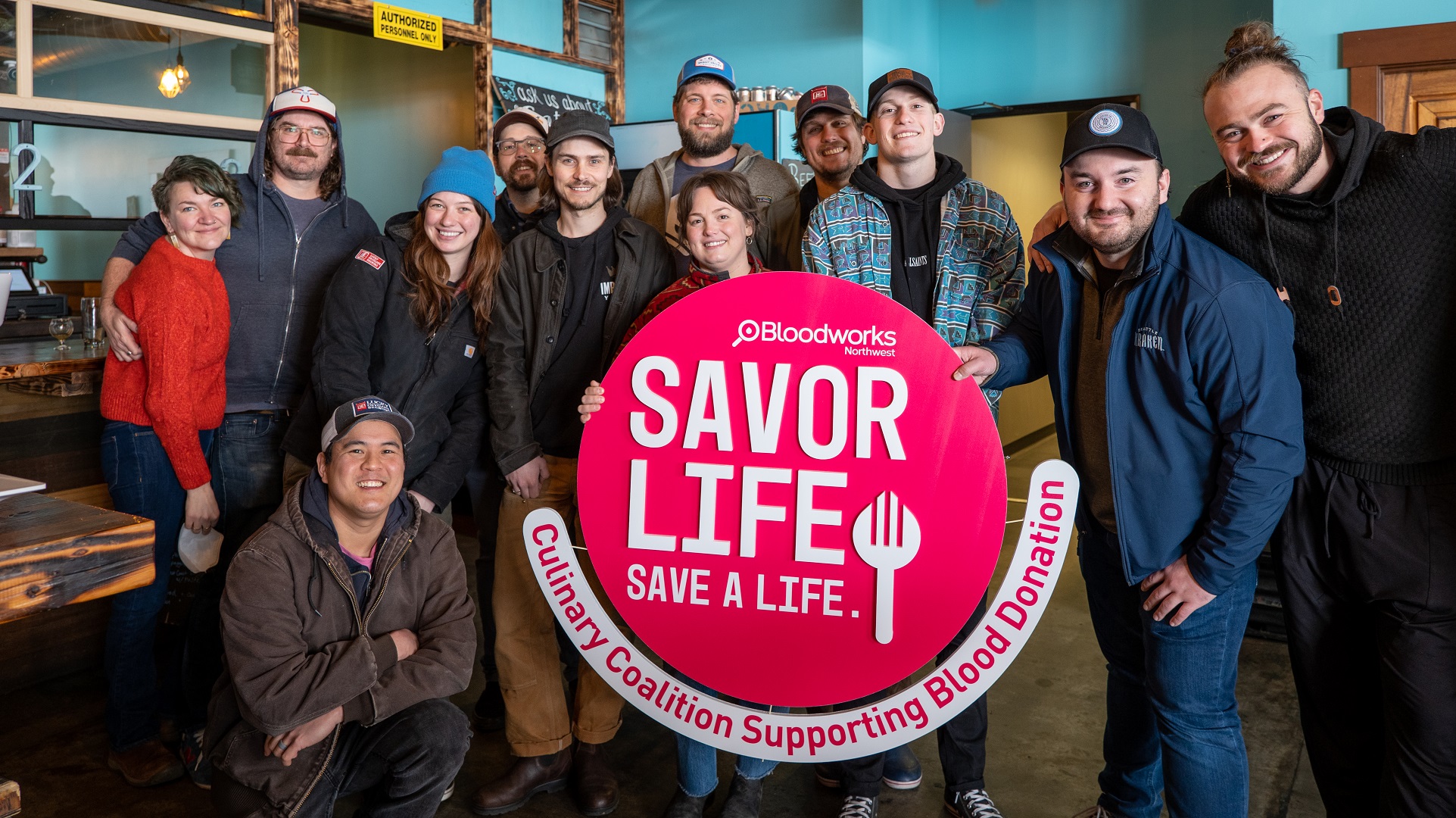 “You have to do this before you do anything?” my colleague Ron Lim asks with a laugh.

We’re at Three Magnets Brewing Co. in Olympia, and one of the brewers has just handed Ron a bag of barley and instructed him to chew it.

By masticating the barley with his saliva (gross), Ron is essentially replicating the brewers’ process of extracting the starches and sugar from the grain–in his mouth.

It’s 8 a.m. in the morning and Ron and I are tired but in for a treat: it’s Brew Day, a collaboration between Three Magnets and Lucky Envelope Brewing in Seattle to promote blood donation as part of Bloodworks’ Culinary Coalition.

Ron and I are typically all about blood, but today is all about beer. We’re totally fine with that.

The beer being brewed today under the watchful gaze of Aaron Blonden of Three Magnets and Barry Chan of Lucky Envelope — currently a mush of mashed grain swirling around in large, steaming vats — will eventually be on tap in their taprooms and at Flatstick Pub, who has selected Bloodworks as the Sunday Fundraise cause for April at their Pioneer Square location.

Talking with Aaron and Barry, I’m in the same spot as I am when I work with Bloodworks’ research scientists: their passion for their craft is evident, even if I don’t fully understand everything they’re saying.

“We’re making an IPA,” explains Aaron. “It’s predominantly a base malt with about a 4.7% addition of a color-adding sweetness, like a crystal malt, and then a very small addition of – every brewer has it in their bag of tricks – [a malt called] Carafa Special 3, and it’s how we can really darken something without bringing the roasty, overbearing notes that you would get from a Stout.”

“The recipe we ended up deciding on is a red IPA with a blood orange zest,” Barry clarifies.

Brewing is as much science as it is art, if not more so. Every measurement needs to be exact for the chemical and biological changes needed to turn water, hops, and malt into fermented magic to happen.

We’re surrounded by a much larger group than I had expected: Aaron and Barry’s crews; representatives from Skagit Valley Malting, Imperial Yeast, and Cascadia Canning; and a trio from Flatstick Pub, likely awake much earlier than their usual bartending schedule allows but full of enthusiasm.

“We wanted to help tell the story with the supply chain that we deal with in beer to correlate that to the supply chain with blood in the States right now,” says Aaron, “with all these people participating to make one beer for one good cause.”

Like Bloodworks, the ingredients are local to Washington and Oregon. Aaron and Barry liken the strength of the beer community – the connection between brewers, growers, sellers, patrons, and fans – to the role donated blood plays in keeping the greater community safe and healthy.

“Part of beer, and why Barry’s here too, is we appreciate each other,” Aaron continues. “I’ve not brewed with Barry until today, but we’ve brewed with the same people.”

“We had to be talking for at least the past three, four, five years about brewing together,” adds Barry. “The brewing industry is such a tight community, and similar experiences reinforce that.”

Aaron and Barry signed on to the project for the opportunity to collaborate, give back, and tell a story through beer, but the pair each has a connection to blood donation.

Barry’s wife needed blood during the birth of their second child: “It wasn’t a necessarily complicated birth by any means, but it was still complicated enough that we knew she needed to get a few pints of blood. That was kind of eye opening: for something that could seem as normal as a birth, even then it’s a common occurrence to need that.”

“Even before then, I’ve been donating blood to Bloodworks Northwest several times a year,” he adds.

On the other end of the circle of life, Aaron came into the world with newborn jaundice and received a transfusion before leaving the hospital. “In that time, 1984, my parents were scared of a blood transfusion, so I know that kind of shaped a narrative for me, young, because it worked out just fine, and it helped me, too.”

At some point, the brewers take a break for pastries and coffee, and someone hands Ron and me a couple of glasses of something. It’s 10:30 in the morning, but it’s bad luck to brew beer without drinking beer, so we clink glasses and toast to the day’s adventure.

We’re not sure which of Aaron’s creations we’re drinking, but it’s crisp, bright, balanced, and super tasty, a small pleasure that makes us even more excited to see how today’s finished product will be received by the beer community.

“Giving blood is a really great step to improving yourself, improving your community, and helping everyone out,” says Barry. “Even if you think it’s a small thing, small steps add up a lot.”

“There’s no economic or political barrier to doing the right thing and giving blood,” Aaron adds. “Sometimes we don’t think about what it could be that gets somebody there [to need a transfusion], It doesn’t need to be immensely complex. It could be something simple.”

Something that they’ve tried to do with their beer — in Barry’s words, “Keep it simple, keep it focused, and keep it delicious.”

We’ll drink to that.

Join us for the launch of It Takes All Types IPA