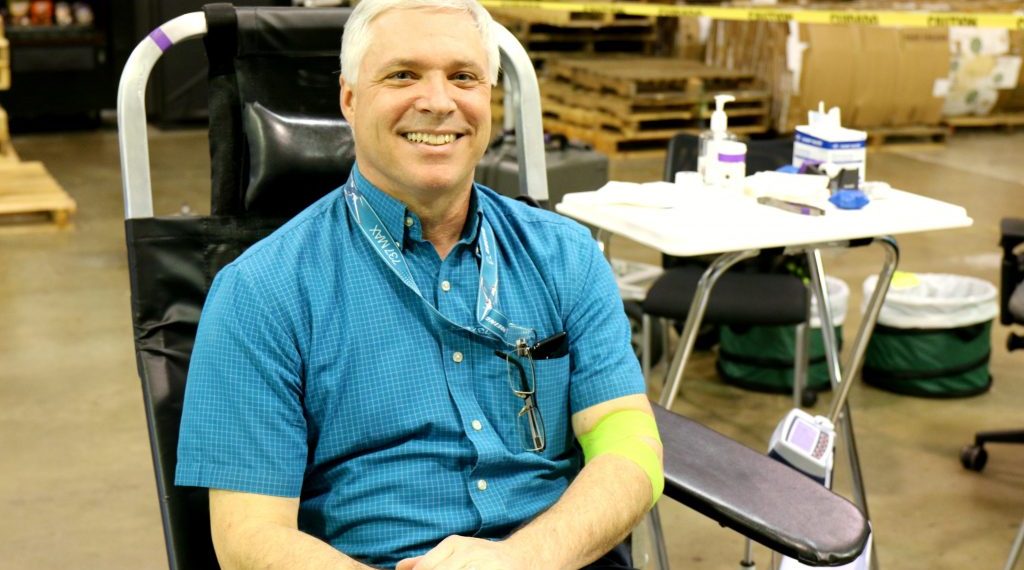 He’s been here before. It’s Tuesday, April 10 and 55-year-old Joe Geck of Everett, Washington is donating his 100th unit of blood at a Bloodworks Northwest mobile drive in Boeing’s Mukilteo corporate offices. “I get paid to lay down on the job,” he jokes as the donation begins just after lunch. There’s 80s rock playing on a portable sound system, which brings a smile to Joe. It’s music he grew up with. He asks one of the phlebotomists, “Whose playlist is this? I love it!”

Thirty-seven years ago, Joe started donating at Portland’s Jesuit High School. “Back in high school it was just something you were supposed to do,” he said.

Now the engineering manager has been donating at Boeing for 31 years—and working as a tireless advocate for the simple, life-saving act of giving blood. You could call him a blood donation evangelist. “Here at Boeing they make it so easy,” he said as he bites into an oatmeal raisin cookie when his donation is complete. “As a donor, we don’t think about the impact we have, the lives we save. It’s pretty cool when you think with those 100 donations, I’ve saved 300 lives.”

After giving blood, Joe always asks for a bright-colored wrap. That way, he’s a walking testimonial.

The Boeing Company is another stand-out blood donation advocate. Its history with Bloodworks Northwest goes all the way back to 1944 when it was a founding member of then-called King County Central Blood Bank. Today, Boeing supplies the most employee blood donors in the Puget Sound and the Employees Community Fund of Boeing is a generous Bloodworks charitable contributor. Boeing is also a sponsor of the Bloodworks Ball on May 19.

When he considers blood donation, Joe thinks of his family members who have benefited from the Bloodworks contributions he and other local donors have made over the years. And he thinks about the dinner he and his wife are going to have to celebrate his 100 donation milestone later that day.

For now, there’s one last thing Joe Geck does before he leaves the donation center. As he’s walking out, he notices one of his staff headed down the hall. “Have you donated yet?” he asks, “They’re still in there taking donations.” His co-worker hesitates but then he notices the bright green wrap on Joe’s left arm. “Come on,” Joe said, “It’ll just take a couple minutes.” The co-worker takes a few steps toward the donation center, then makes the decision to donate. Joe Geck, the blood donation evangelist just smiles.

His 101st donation is scheduled for June 5.